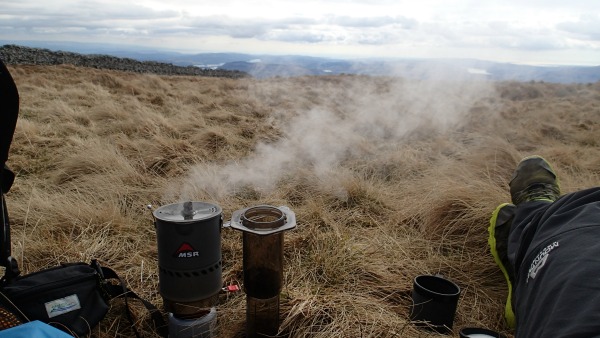 Runners are the biggest experts at trimming grams and using the latest gear available, especially when it comes to runs and races that involve more than one day. In the UK there is this odd concept of overnight mountain races – stretching from 2 days to 5, these races are somewhere between ultra running and backpacking. Participants run in pairs as a team and must carry all their gear for the duration of the race; yes, running with all your over night gear. You can imagine the level of planning and gear tweaking that is done to minimise the weights of packs to allow for comfortable running.

“Cutting corners” on gear is not really an option either, as usually there are minimum gear  requirements for all participants, as you can see on the Original Mountain Marathon (OMM) rule book.

When planning for those races the two main problems are carrying a light enough shelter (racers tend to share a 1 person tent) and how to deal with carrying a cooking system and food for the duration of the race. Today I want to touch on how to deal with the cooking aspect – the possible systems that are commonly used in those races and how can that be implemented to other kinds of adventures such as backpacking or even just a day hike (nothing like a fresh brew on a peak).

Without further ado, the options:

Micro stoves are those amazingly small and light stoves that sometimes seem to disguise themselves as transformers: they fold to such a tiny size that they can easily fit into a pocket, which makes them ideal for adventure races. Micro stoves (or ultralight stoves) tend to weigh 1.5-3oz, are powerful and simple to use. Their big drawbacks are instability, poor performance in bad weather (especially strong winds) and they tend to be expensive. The most famous stove in this category is the MSR MicroRocket, but there are other great stoves out there such as the Snow Peak Litemax Titanium, Alpkit Kraku and more. It is important to remember that these stoves don’t usually come with a piezo igniter so a means to light the stove is needed (I recommend flint, works even if wet).

With those tiny stoves, a titanium mug or a small pot is enough. Those pots allow boiling up to 34oz of water; usually just 15oz is enough to share between 2 people to re-hydrate some freeze dried food. Those cups will weigh from 1.5-4oz, making them easy on the back.

In addition to the stove and mug, a few items are needed: an igniter (around 1oz), a canister (4oz) and maybe an improvised wind shield (1-2oz). All that tends to be packed into the mug/pot for easy carrying.

This system can be as light as 9oz all together, and since it is easily available and simple to operate, tends to be the most commonly used.

Stoves that are based on liquid fuels are the original ultra light stoves, with Trangia being one of the oldest companies in the game. Over the years liquid fuel stoves have joined the wonderful world of Make Your Own Gear (MYOG) stoves with bear can stoves as the true master pieces. From DIY videos to kits and ready to use cooking systems, liquid fuel stoves are light and very simple. Due to the design flexibility of fuels, these stoves are very commonly used on longer expeditions; their light weight also makes them great companions for adventure racing. The basic concept here is to create a stove that holds a flammable liquid (Methanol, alcohol, ethanol etc) and allows for the best burn.

The high end stoves in this category such as the Caldera Cone system and the Vargo Triad are extremely efficient and light, but liquid stoves don’t burn as hot as gas stoves, making them slower when boiling water.

If you choose to venture into liquid fuel stoves I highly recommend getting a cooking system rather than trying to build your own. The wind screens that come with the cooking systems enhance the radiating heat from the stove and increase efficiency dramatically.

Solid fuel stoves are seen by many as emergency only stoves. These stoves are very similar to candle stoves and they are very simple “holders” of a block of solid fuel (like the Esbit tablets). The solid fuels burn slowly and not as efficiently as the rest of the stoves (think red/yellow flame, not blue), but they will burn even when wet.

You rarely see solid fuel stoves being used in races as the time to cook is excruciatingly long, and hungry racers need fuel in big quantities and fast. One good thing with solid fuel is that it can also be used with the liquid fuel stoves (just switch the stoves) so carrying a couple of Esbit cubes for an emergency is good practice.

This system belongs to the extreme and the masochistic – in order to shave precious grams some will opt for no hot food at all, eating only dry/soaked food. Personally I’m not a fan of this, as a day on the mountains doesn’t just call for calories but also for some heat.

If you do opt for not cooking, the most important thing is to find the best calorie to weight ratio, with calories from fat as the main source of energy.

When weight is an issue it is always good to look at what adventure racers do, as they perfect the art of weight cutting. Personally I use the first system as I like the reliability of a gas canister. Using ultra light cooking means that all I need to do is stick that cup (with the stove and canister) into my bag on the way out to the trail and make a hot drink, or even a meal anywhere that I want.