The Coleman PowerPack Propane Stove is a small, convenient single burner. It’s designed to make camping easy, by being quick to set up and start using just about anywhere. It has a 7,500 BTU output, which is fairly handy for such a small stove. 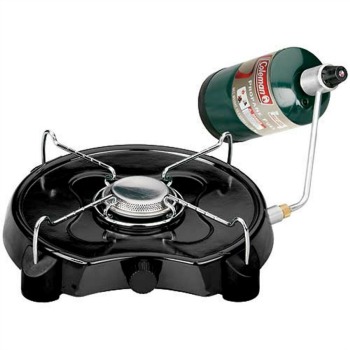 The PowerPack comes with Coleman’s PerfectFlow pressure-control system, and their PerfectHeat technology. This means it’s an efficient and reliable stove, even at high altitude and with low fuel. Couple this with the stoves flat design and you have an easy to clean, transport and use stove.

The PowerPack makes for a great backup option if you’re using larger stoves, or holds its own as a stove for one or two people to cook some basic meals, and boil water.

Setting up the PowerPack is about as easy as it gets. The flame control is really responsive, it’s fully adjustable and allows you to boil water or simmer some food. This is largely due to Coleman’s PerfectFlow technology.

I’ve covered this technology in other reviews, such as the Coleman Triton, one of our highest rated stoves. It works great, and really allows the user to have good control over their cooking. Especially in cold or windy conditions, and if the fuel is low.

You can fit a 12” pan on the burner, which is actually more useful than it sounds if you’re handy with outdoors cooking. It has an aluminized-steel cooking top with a removable grate that is chrome-plated, which means it’s really easy to clean grease off if done immediately after cooking.

The burner is 3.25” and pumps out 7,500 BTU’s. The cylinder attaches on the side and sits nicely out of the way. The whole design is very ergonomically friendly and has a very low profile.

Under field testing the Coleman PowerPack took around 7 minutes 40 seconds to boil a liter of water. This isn’t the most impressive of times, and probably has something to do with not having a wind shield.

The best feature of the stove according to customer feedback is its simmering ability. The low flame means that it’s great for simmering, something to take into account when planning what you’ll be eating.  Prices range from $35 to $60.

The Coleman PowerPack doesn’t come with any wind shields. Being as it’s a flat stove, this isn’t ideal. So unless you are going to be using it under controlled conditions, you’ll need to remember to pack something that will act as a wind shield.

One option is the Vktech wind Screen Shield which works as a wind screen for a number of different stoves and costs around $10.

Coleman always deliver on quality and value for money, and the PowerPack is no exception. I like how versatile this little stove is, you can use is as a small addition to simmer an extra dish, keep it in your pack as a backup, or use it as a main stove if you like travelling light.

It’s lightweight, has good flame control, won’t break your wallet, and is very reliable. That what are you waiting for?

Being as small as it is, the Coleman PowerPack Propane Stove isn’t going to cover everyone’s cooking needs. But it does work well as an emergency backup for everyone. It’s certainly worth taking a closer look at this stove, check the current price but it’s usually around $40 which is a steal.