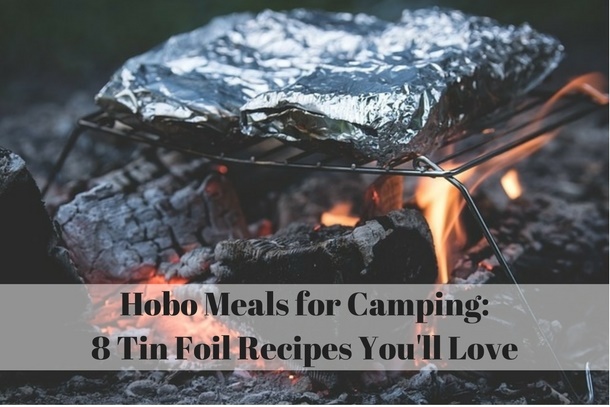 Foil packet meals, or hobo meals for camping have been cooked over a campfire for as long as I can remember. It’s one of the first things you learn how to do in the Boy Scouts, and knowing how to throw together a meal and cook it in tin foil will continue to help you out for as long as you go camping.

In this post, I have put together 8 of the easiest, and best-tasting hobo meals for camping. Hobo meals are another term for foil packet meals. It’s a term used mostly in the States, so for those of my readers outside of the States who arae not familiar with the term ‘Hobo Meal’, as described in the Urban Dictionary it means:

When you have no plates or dishes to cook with. Typically when camping.

Even if you do have plates and dishes, using foil to cook can make meal time a lot more fun and quicker. For me, it captures some of the true essence of camping. Taking ingredients, wrapping them in tinfoil to make a parcel, and placing it on the hot coals of a campfire to cook.

You can prepare some meals before leaving home and have them ready to go, or just as easily put them together when the fire is roaring. Another thing that’s appealing about hobo meals for me is no cleaning up afterwards! No scrubbing fat off a drip tray, no dirty pots and pans, just some foil to pack away.

With more than enough reasons to cook some foil pack meals, here is everything you need to know, and some of the tastiest recipes you’ll come across.

Sausage and eggs are great any time of the day from breakfast to a late-night snack. It’s simple to cook, and takes care of the hunger pains quickly.

A tip to remember here is to fold the sides of the foil in so the eggs won’t spill out before they are solid. A hash brown makes this recipe a lot easier as you can use it as a bed for the eggs, however it’s still pretty easy without.

Place the eggs in first and a sausage either side of the foil pack along with some seasoning to your preference. Wrap it up nice and secure and find a flat space to leave it to cook. It shouldn’t take longer than 15 minutes, but open up and take a look after 10 minutes to see that it’s on track.

Ingredients for Hobo Sausage and Eggs

Fish is another great campsite meal. It’s even better if you’ve just caught it yourself, but in most instances it’s coming out of the coolbox, nothing wrong with that.

Just like when you BBQ fish there is a lot you can do with the seasoning and I’ll leave that up to you to change as per your preferred taste. Here is what I recommend though:

Melt some butter and add a few drops of lemon juice, add a pinch of salt and pepper, and some dill (the perfect herb for fish, it comes in small bottles but an optional ingredient).

Place you fish onto some foil, add the dressing made as per above, wrap the foil pack up with a flat underside so all the dressing doesn’t end up in one corner.

An average size fish takes around 20-25 minutes to cook. Check the fish is cooked through with a knife before serving.

Corn on the Cob

Another campfire classic, corn on the cob. One of the quickest and easiest foil pack meals to make, you can either eat as a snack or use to accompany a larger meal.

Just lay the corn cobs on a sheet of foil, spread some butter over them and add some seasoning to your preference. Place on top of hot coals and check after 15 minutes to see if they’re cooked.

Ingredients for corn on the cob

If you’re looking for a complete meal then grilled chicken with rice is just the meal. It’s healthy, filling, easy to cook, and tastes great cooked in a foil packet.

The important thing here is to use converted rice. Converted rice grains have little pinholes that make it cook better in a foil pack. Dice some fresh chicken, add some seasoning, wrap it up in foil on a bed of rice and leave it for 20 minutes or so.

Ingredients for grilled chicken and rice

This recipe is a dessert treat that are really easy to make and incredibly satisfying to eat. You only need to ingredients, oranges and cinnamon rolls. Hollow out an orange, or keep the skin when you are eating the orange, and stuff a cinnamon roll inside.

When hollowing the orange cut a lid on the top that can be placed back on, you’ll need this on when cooking. Wrap the orange in foil, place it on the hot coals of the campfire, and cook for around 10 minutes.

The orange protects the cinnamon roll from the heat, while warming it up and melting the frosting. It tastes like an orange-infused Cinnabon, it’ll be soft enough to eat with a fork or spoon out of the orange or you can tip it out onto a plate.

This is a meal to keep the kids happy, and it only takes around 10 minutes which at the end of a long day makes all the difference.

You do need to bring some frozen french fries with you in your cool box, but it’s worth it. Lay some fries on a sheet of foil, turn the edges in and make into a foil packet. Leave a hole at the top to let the steam escape.

Cook on hot coals for around 20 minutes, then add some cheese and bacon bits, cook for another 5-10 minutes until cooked through. This is a fun meal to eat out of the pack with a fork, who needs a fast food restaurant while camping!

Ingredients for french fries with cheese and bacon bits

The Philly cheesesteak sandwich is one of the most popular fast food sandwiches across the States, and it’s not hard to whip one one of your own while camping.

Make several slices into the French bread and spread some garlic butter into the slots. Stuff some pepper and onion in first, then add a slice of cheese, then a fold of sliced beef. Add as much of each filling as you want but try to keep as much inside the loaf as possible.

Wrap the loaf in foil and sit on some hot coals. It takes around 30 minutes to cook through, be careful when you unwrap the packet as the cheeses will be melted and spill out.

Chicken and potatoes make for a hearty meal at the end of a long day. This recipe includes BBQ flavoring, but you can use any seasoning and flavoring for the chicken you want.

Chop up the potatoes and wrap them in a foil pack. Cook the potatoes first for around 10-15 until soft. Open the foil pack and add your chicken and sauce. The chicken will take around 25 minutes to cook, always check carefully the chicken is cooked through before eating.

You can add some cheese and return to the coals for a few minutes or just place on top for serving.

Ingredients for BBQ chicken and potatoes

There you have it, 8 easy to do recipes that can be achieved with very little ingredients. Hobo meals for camping don’t have to be boring, or stop at a large baked potato. Don’t be afraid to try out some recipes of your own or foil pack some meals you would have otherwise cooked on a stove. What’s the worst that can happen? Have fun!

If you’re still looking for more recipes I’ve published some in single posts previously. Check out how to make a Full English Breakfast, or a delicious Sweet and Sour Chicken among other camping recipes here.