YETI make some awesome coolers. Literally some of the best on the market. They do everything as advertised and more – so if you have the budget for one I recommend picking one up.

The downside, however, is that they are also one of the most expensive brands of cooler.

Sure, you still get good value from a YETI. You’re going to have ice chilled beer, meats, and soft drinks on tap for days on end – but there are cheaper alternatives.

Unless you absolutely have to show off the YETI brand when you’re camping, if you can use a YETI alternative that does everything you need for less, why not go for it?

It’s also possible you just don’t want to own a YETI for some reason. I’ve used a lot of different coolers over the years and can reassure you there are cheaper options out there.

Which is why I’ve put together this little comparison of Camco Caribou Coolers vs YETI.

For the purpose of this article, I decided to look at the YETI Roadie 20 as it’s one of their most popular smaller coolers. And, the Camco Caribou 20L as it’s Camco’s most comparable model.

Here is a look how their specs stack up against each other:

As you can see, the main differences are that the YETI Roadie is slightly larger and a little heavier, and has that extra quart capacity as a result.

Apart from those fringe situations when you can’t fit the last can into your cooler, I don’t think that 1 quart will be the breaking point when choosing between these two.

So, let’s take a look at the other specifications, user feedback, and see if the Caribou is a viable alternative to the YETI as it’s certainly an alternative option to the YETI.

Related – I did an analysis of the YETI Tundra vs the Coleman Xtreme. 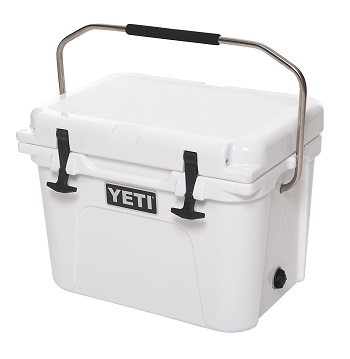 The first thing you notice about YETI coolers is how robust and well-constructed they are. They feel really solid, when you lock the lid you know it’s locking airtight, and anyone who has owned one will tell you they’re pretty hard to damage.

In fact, they claim it’s bear-resistant. I haven’t seen the studies to prove this, neither do I want to test this myself by the cooler somewhere a bear can paw at it – but this is a pretty cool statement.

The Roadie has around 3 inches of PermaFrost insulation and extra thick walls. I couldn’t find any tests to confirm just how long this cooler will keep ice from melting, but 3 plus days has been confirmed by more than one person.

This is pretty good for such a small cooler and means you can head out for a long weekend without stressing about having a warm beer towards the end (priorities). 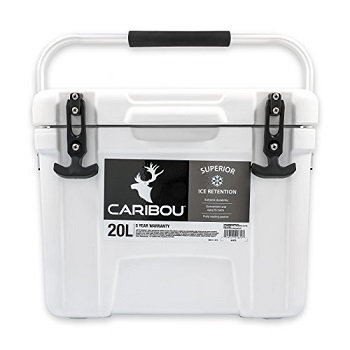 I don’t have any scientific evidence to back this up, but feedback on the Caribou is that it’s just as durable and well constructed as the YETI. And customer feedback is what really matters.

The facts are that it may not be as strong put under extreme stress testing, but it’s more than strong enough for camping, backpacking, tailgate parties, fishing, and any other outdoor activities – and that’s what is key here.

I mean, they don’t claim it’s bear-resistant or anything like that…

It seals with an airtight gasket and is made from a rotomolded one-piece of reinforced plastic. This means there are no seams, weak spots, or places where cracks can develop.

It’ll keep your ice cold enough to stay as ice for 3 or more days the same as the YETI. So it’s tough to say one is better than the other, which is great. It means you have a choice.

Is the Caribou 20L a Good Alternative to the YETI Roadie?

Looking past the YETI logo there is very little to split these two coolers apart. They look similar, have similar dimensions, weight, and perform roughly the same.

In my opinion, the only question you need to ask yourself is if the Caribou is large enough.

The 21 quarts capacity of the Caribou means it’ll hold around 26 lbs of ice, or 18 cans of drink if that’s easier to visualize.

You don’t need to question the durability, it’ll keep your stuff cool for a few days, it looks great if that helps, and is easy to use.

So, if you’re looking for an alternative to a YETI Roadie cooler I recommend checking out the Camco Caribou 20L.

You can browse more of Camco’s range of coolers via the link below too if you want a different size.

If you’re interested in a larger YETI, check out my review of the YETI Tundra.