The Jetboil Flash Personal Cooking System is the #3 rated stove due to a number of unique features on top of the efficiency and rapid boiling ability that it is known for. These unique features include a gauge that tells you when water is about ready to boil (reducing fuel use), a sipping spout built into the pot, a base cap that can also be used as a bowl, and a neoprene cover that allows you to handle the pot while hot.

It is considered a cooking system because the stove and cookware is one self-contained unit. 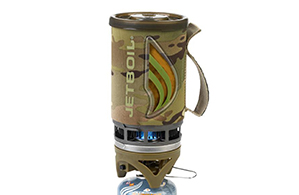 The entire cooking unit packs up into the cooking pot decreasing the overall size to under 8” within your pack.  You don’t have to worry about any sharp edges like other stoves as this one is completely smooth when packed up.

The super simple set-up includes screwing the stove onto the fuel canister then placing the pot on top of the stove.  Add water, turn the fuel on and push the auto-ignition button to create the flame.  You can use non Flash cookware if you purchase a Flash pot stand separately.  The dimensions are 7.1” x 4.5” x 4.1” and it weighs 15.2 ounces putting it at a very similar size and weight to the MSR Reactor.  It burns isobutane fuel and is very efficient with a maximum 4 hour burn time on 20 ounces of fuel.

Although this was the #3 rated stove this year it has many of the features of the higher rated stoves.  It is very similar to the MSR Reactor System but has a few additional features for less money.  These include the auto-ignition and an alternative pot holder among other features.  This is going to be a great stove if you are looking for one with great boiling ability at a good price.

It will boil a liter of water in about 5 minutes.  There isn’t much overall maintenance required for the Flash 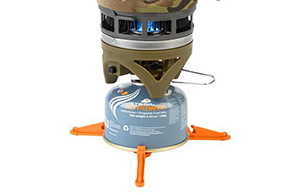 .  The Jetboil does take a little longer to boil water when compared to the two higher rated stoves this year. The Jetboil is still one of the fastest stoves out there and will save time for other camping activities.

The company recommends using Jetboil fuel only so this could complicate longer remote trips where fuel is hard to come by.  There are so many great features that far outweigh the few cons as we have already noted.  I have listed a few alternative campfire cooking methods as well at this link.

The efficiency, value, diversity of pot uses and boiling time are also key features that help to put the Flash in the Top 5.  The Flash also comes in multiple colors as noted by the camouflage model I have shown here.  Take a look at some of the other colors and models at Jetboil’s website.

The extra pot support is sold separately as are the fuel canisters.  All of these items along with the stove fit inside the the pot for a nice compact unit that can be thrown into your pack.  Because it is self contained it is fairly wind resistant.  The MSR Reactor will do a better overall job in very heavy wind because of the heavily protected radiant burner design.  The cooking pot acts as the storage container for everything when traveling.  Prices range from $80 to $100.

Most cooking systems are only able to fit with the cookware contained with the package.  On these other models you won’t be able to use your old trusty metal cup and your partner won’t be able to use there alternative pot.  A nice feature of the Flash is a folding pot stand that allows the use of other cookware and can be purchase separately.

Some of these stove systems are typically less stable because of the height of the pot when connected to the canister and stove.  The Jetboil Flash Personal Cooking System has a foldout base stand that adds a lot of stability to the sytem.

Almost every person you talk to who owns or has used a Jetboil will tell you they absolutely love them.  Similar to the MSR Reactor, this stove is super efficient and super powerful. Up with the leaders in the field for boiling time, efficiency and ease of use.

The Flash is also very affordable and has a number of unique bonus features that some of the other stoves in this class do not have.  The Jetboil company has quickly become a leader in the backpacking and emergency preparedness fields.

The Jetboil company will likely continue to provide great innovation and design features that meet a diversity of needs.  I highly recommend the Jetboil Flash Personal Cooking System.  Give one a shot and let me know where you were able to use it effectively.