Coleman make some of the best and highest rated camping items available. Their lanterns are among some of their best selling kit. This Coleman Twin LED Lantern review will take you through the paces of this best selling product.

Whether you’re looking for your first lantern, or need a more powerful one than what you have. This lantern is one of the best on the market, and it won’t break the bank either. Let’s take a look at the specifics. 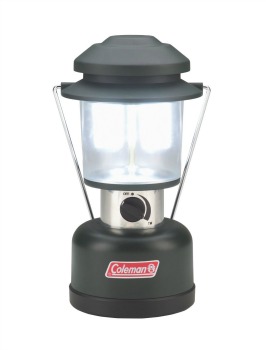 The first thing you notice about the Coleman Twin LED Lantern is how powerful it is. It produces 390 extra-bright lumens on its highest setting, if you’re not familiar with the lumen rating I can assure you this is more than enough to light up a pretty large campsite. Coleman have really gone all out on the power of this lantern, so tick off the power aspect as a winner.

All that power is no good if you don’t have good control over it though. The lantern has a large rotary knob on the front allowing you to turn the power up and down to get the brightness suitable for what you’re doing. There are in fact seven different levels to the light output. Giving a spectrum as wide as a dim light for reading, to full out illuminating a whole campsite.

The glass is a frosted twin-globe setup. This evens out the light so you don’t get any bright spots. Another massive plus to having LED light is that it doesn’t attract all those little bugs that are attracted to heat. As LED power doesn’t generate heat.

This Coleman lantern is very affordable too. If you don’t have a lantern at all, this is a one-stop answer due to it’s power. It’s a great choice for outdoors and all weather backpacking too. It’s water-resistant, well constructed, and a durable bit of kit. It has a rubber sole, so you can place it anywhere and it won’t slip.

While the 70-80 lumen range that a lot of lanterns produce is pretty handy, there’s no harm in having a lot more at your disposal. It comes at a cost however, and this is battery life and weight. The batteries are heavier in the Coleman, and on the highest setting the batteries will drain faster.

It comes down to personal preference, but I think having more power available in case you need it is worth it. They’re in the same price range too, so I’d go with the Coleman.

Another noticeable difference is the weight. The Coleman is 3lbs, while the Black Diamond models are less than half a pound. That’s a huge deal to the ultra-light backpackers, so worth considering when choosing between the two.

Although the lantern only weighs 3lbs, which isn’t a lot. You can drop at least half the weight by using dry cell batteries. Lithium batteries are probably the heaviest, but you will get a longer life from them. Just a tip for the ultra-light backpackers.

It’s easy to think there isn’t much to choose between with lanterns, but there is. This Coleman lantern is more of an all-out power monster than a refined all-rounder. Nothing wrong with that though, if you want powerful long distance light this lantern is for you.

Lanterns don’t come much more powerful than the Coleman Twin LED Lantern. If it’s bragging rights you’re after at the campsite this lantern will impress. You don’t have to have it maxed, it’s just as useful on the lowest setting for dim light.